Photo of our clergy taken with The Rt. Rev. Gregory O. Brewer, Bishop of the Diocese of Central Florida, on October 7, 2018. 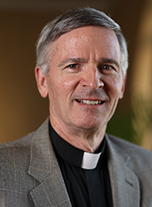 He was born in Shreveport, Louisiana and received a BS degree from LSU in 1978 and an MA from the University of Texas in 1981. Fr. Reid went to seminary in the summer of 1989 and graduated from Trinity Episcopal School for Ministry in May, 1992. Thereafter, he has served churches in Shreveport, Louisiana, Bennettsville, South Carolina, and Memphis, Tennessee. He completed a Doctor of Ministry degree from the Reformed Theological Seminary in Orlando, Florida in December, 2010.

Fr. Reid met his wife Deanie at the Catholic Student Center at the University of Texas at Austin and married June 28, 1980. They have a daughter Amy and a son David. Fr. Reid worked for his father in Lafayette, Louisiana as a geologist in the oil business from June, 1980 - June, 1989. Deanie graduated with honors from the University of South Louisiana in 1982. Fr. Reid and Deanie were raised in the Roman Catholic Church and began attending an Episcopal church in Lafayette, Louisiana in August, 1984. They were received into the Church the following year. Deanie is a full-time teacher in the Polk County School system.

Fr. Reid loves the All Saints' family, his sacramental duties, building adult Christian education and leading the parish in spiritual growth through the faithful proclamation and teaching of the gospel. He supervises an excellent staff that loves and serves the people of All Saints' faithfully. Fr. Reid is the Chaplain of the All Saints’ Doulos Chapter of the Order of St. Luke and loves to preach and teach the Bible. He particularly loves the Wednesday Morning Bible Study, Men's Friday Morning Bible Study, and Wednesday Night Parish Academy. Additionally, he enjoys the Parent Class which meets twice a week.

Fr. Reid's hobbies include reading, running, football, Shakespeare, and movies. He also loves working in the yard and following the Dallas Cowboys football team, which he has enjoyed since 1965. 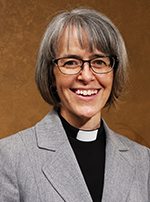 The Rev. Kathy Elizabeth Hulin serves as Assistant to the Rector. Previously, she served as Director of Family and Women's Ministries at All Saints’. She was ordained as a transitional Deacon on January 29, 2018 and to the Sacred Order of Priests on October 7, 2018.

Kathy was born on Andrews Air Force Base and grew up in Dale City, VA until the age of 7 before moving to her mom’s hometown in northcentral Pennsylvania. She developed her musical interests during middle school and high school and pursued musical studies at Mansfield University, Oberlin Conservatory, University of Wisconsin at Madison, and Peabody Conservatory. She holds a B.M. and M.M. in horn performance and met her husband Charles Hulin IV while pursuing doctoral studies in music in the mid-90s. Kathy made a public profession of faith in 1996 at Lee Street Memorial Baptist Church in Baltimore and was baptized on Dec. 1, 1996 at the age of 24.

Following her baptism, Kathy actively engaged in education, service, and mission opportunities through her church. In 1997 she began serving her church as paid staff and Charles and Kathy offered worship concerts in area churches. In 1998 Kathy was hired as Minister of Music at Lee Street Memorial Baptist where she served until called to seminary training in 2000. She attended Baptist Theological Seminary at Richmond in Virginia and earned a Master of Divinity in 2003. When called to serve Woodland Heights Baptist Church, she was ordained to the Gospel ministry by sending church to Grace Baptist in 2004. In 2007 Charles and Kathy moved to Murfreesboro, NC where Charles taught at Chowan University and Kathy served as Associate Pastor for Music and Worship at First Baptist Church in Ahoskie.

In 2010 Charles was called to serve on the faculty at Southeastern University and Kathy was hired by South McKeel Academy to work with students. Kathy taught in the music classroom to K-7th graders until the fall of 2014 when she resigned to become Director of Family Ministries here at All Saints’. Her introduction to our parish was through the children’s and youth music ministry in 2013, where she served part-time as the Children’s Choir and Youth Ensemble Director.

Kathy and her husband Charles call Lakeland their home and love serving our community. Kathy considers it an honor and a privilege to be serving God through All Saints’ Church and hopes to be doing so for many years to come. 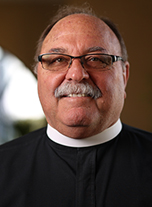 The Rev. Robert W. Johnson serves as the Deacon at All Saints'. His ordination to the diaconate was on September 10, 2016.

Deacon Bob was born in Wurtzburg, Germany, and grew up in Winter Haven, Florida. He graduated in 1974 from Auburndale High School and the University of South Florida in 1988 with a Bachelor’s degree in Business. As a child, Bob attended St. Paul’s Episcopal Church in Winter Haven.

Bob was an Eagle Scout with Troop 123 in Winter Haven. He was very active and became acquainted with the Brosseau family. Doug Brosseau was a Scout in the troop and his father Jim was very active also. He met Debbie Brosseau in the fifth grade and we went to school together through middle school and high school. They married in December of 1978 and have four wonderful grown children: Emily currently teaching English in China, Rebecca working at the Smithsonian Postal museum in Washington, D.C., Benjamin teaching in the Polk County School system, and Meredith working for Champs Sports in Sarasota, Florida. They have one grandchild.

Debbie has a Master’s Degree in Speech and Language Pathology from Florida State University and is working in the Polk County School System. The Johnsons' have been members of All Saints' Episcopal Church since 1985. Debbie has been serving as a Chalice and Subdeacon for over 25 years. In the 1980’s Deacon Bob served as the Acolyte Warden.

His ministry with All Saints’ is to communicate the needs of the community to our church and build up the members to love and serve our Lord in the community by addressing those needs.