Please take time to explore the information on the world of Episcopalians below. For statistical data, click here.

The Episcopal Church is part of the worldwide Anglican Communion. The word 'Anglican' comes from the word 'anglia', the Latin name for England. When Episcopalians refer to themselves as Anglicans, they are referring to their Church of England roots.

The Episcopal Church has a story that goes back to Jerusalem itself. Christianity began when Jesus of Nazareth established the foundational church in Jerusalem under the authority of the Apostles. The Christian religion began as a part of the Jewish religion as the Apostolic Church. During this time early Christianity began to transform itself into the non-Jewish culture of the Greeks and the Romans on one side and into North African cultures on the other side. This first great transformation of the Christian religion greatly impacted the history of Christianity. 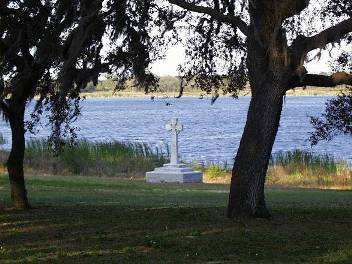 By 150 AD the main activity of the early church had shifted from the Hellenistic-Jewish Christians of Judea, Samaria, and Galilee to Gentile Christians centered mainly in Corinth and Rome. This was due to the leadership and influence of Paul of Tarsus.

There were two distinct stages in this diffusion. In the first, Europe was a highly diverse, multicultural society. As Christianity spread among the diverse cultures it was 'further' transformed in part by each of these cultures. We see this today in cultures such as the Celtic, Scottish, Irish, English, French, German cultures (to name a few) and their particular socialization of Christianity. In the second stage, Christianity became the common ground for a European monoculture.

For the first thousand years of her history, the Church changed quickly, but it was essentially one. Five historic Patriarchal centers - Jerusalem, Antioch, Rome, Alexandria, and Constantinople - formed a cohesive whole and were in full communion with each other. There was an occasional heretical or schismatic group, but the Church was unified until the 11th century. Then, in events culminating in 1054 A.D., the Roman patriarch pulled away from the other four, pursuing the long-developing claim of universal headship of the Church. The world had made its way into the Church. The Roman Catholic tradition continued down one road of history and the Orthodox traditions continued down another road of history. The Episcopal Church came from the Roman Catholic road.

The Roman Catholics in Great Britain began to pull away from Rome in 1529 because of the Roman Catholic Church corruption. This was the beginning of the English Reformation. By 1534, under Henry VIII, the English people formed their own independent church, called the Church of England. Christians in England had been under the full authority of Rome since the Norman Conquest in the 11th century - for about five centuries. The new English Church stayed fairly close to Roman Catholic traditions and King Henry VIII remained a devout Roman Catholic all his life. 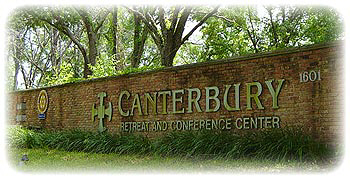 The Church of England has a long and good history. Its doctrine and structure are built around the Book of Common Prayer, the Articles of Religion, the Creeds, and other traditions such as government by bishops.

Following the break with the Roman Catholic Church, the Church of England wrote a book to guide its worship. This was the 1549 Book of Common Prayer. It has since evolved into new translations. The Articles of Religion defined the differences between the new Church of England and the Roman Catholic Church. The Creeds were continued as basic statements of faith dating from the 2nd and 4th centuries - when Christianity was one.

The next step toward the birth of the Episcopal Church came when the Church of England came to colonial America. Anglican chaplains brought their faith to the American colonies with the first explorers. In 1607 the first permanent church settlement was started in Jamestown, Virginia. In 1689 King's Chapel was built in Boston. It was the first Anglican Church in New England. In 1693 the College of William and Mary was established in Williamsburg, Virginia. It stressed Anglican faith and study.

From 1695-1705 expansion was rapid. Other church settlements were organized in larger cities, such as New York and Philadelphia. By the American Revolution (1770's and 1780's), Anglican churches were located in every colony. In several Southern colonies, the Church of England was established as the state religion, supported by public taxation.

Although membership grew, Anglicans were a religious minority in America. A lack of bishops and their unpopular reputation of being tied to the English government limited them. There were no bishops in the early colonies. This was a problem  because it takes a bishop to ordain clergy. Plus, it takes three bishops to ordain a bishop. Consequently, colonial ministers had to travel the dangerous return route to England to be ordained. 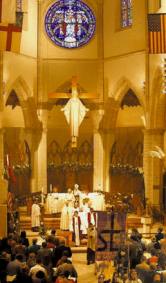 The America Revolution was a time of crisis for the Anglican Church in America. When the war began, many Anglican clergy left the country because at ordination they had sworn loyalty to the King of England. Church members who remained loyal to the English Crown suffered persecution by imprisonment and banishment. Church membership declined.

Many church members, however, supported the Revolution. Two-thirds of the signers of the Declaration of Independence and the Constitution of the United States were Anglicans. Such leaders as James Madison, George Washington and Patrick Henry were Anglicans. Some outstanding Anglican organizers who emerged during the Revolution were Dr. Samuel Seabury, the first American bishop, the Rev. William White, chaplain of the Continental Congress, and the Rev. Samuel Provoost, chaplain to the first U.S. Congress.

After the American Revolution, the Church had to begin anew without Church of England support. They needed bishops, a national organization, and the ability to govern themselves. The clergy took steps to solve these challenges.

In 1782, Rev. White published a pamphlet called "The Case of the Episcopal Churches in the U.S. Considered." It was the first proposal for an American Episcopal Church - traditional, but separate from the Church of England. In 1784, a group of Connecticut clergymen chose Dr. Seabury to be the first American bishop. He went to England to be ordained, but was refused because he wouldn't pledge allegiance to the King. Finally, he was ordained in Scotland. In New Jersey, an assembly of clergy and laymen agreed on a preliminary declaration of principles and called for a larger convention to further organize the Church.

The first General Convention was held in 1785. Church members from most states met in Philadelphia. They began to form a Church constitution and a revision of the Book of Common Prayer, but there were still many disagreements. This group urged English bishops to ordain chosen American bishops. In 1786, an Act of Parliament was passed, allowing American bishops to be ordained without an oath of allegiance. The following year, Rev. White and Rev. Provoost were ordained in England.

On October 16, 1789 in Philadelphia the Episcopal Church was officially organized at a General Convention. Church members from all the states gathered and adopted a constitution that stressed flexibility. It provided for church structure independent of foreign and civil authority, legislative general conventions that included laity, election of bishops, and education of clergy. Members ratified seventeen Church laws as foundations of Christian doctrine and they also authorized a revised, American Book of Common Prayer.

Since 1789, the Episcopal Church has become a church treasured by many people. We hope that you find this very brief history helpful and we hope that you will find your journey with us at All Saints' Episcopal Church both joyful and meaningful. All Saints' has been serving Lakeland, Florida for 125 years. Take time to visit this historical parish and get to know the people who are still 'making a difference'!

The History of the Episcopal Shield

The red cross on a white field is the St. George Cross, an indicator of our link to the Church of England, the mother church of the Anglican Communion. The miniature crosses in the blue quadrant symbolize the nine original American dioceses that met in Philadelphia in 1789 to adopt the constitution of the Protestant Episcopal Church in the United States of America.

The outline of the miniature crosses is in the form of St. Andrew's Cross in tribute to the Scottish church's role in ordaining the first American bishop, Samuel Seabury, in 1784. The colors red, white and blue symbolize, respectfully, the sacrifice of Christ and Christian martyrs, the purity of the Christian faith, and the humanity of Christ received from the Virgin Mary. In duplicating the colors of the American flag, they also represent the Episcopal Church's standing as the U.S. branch of the Anglican Communion 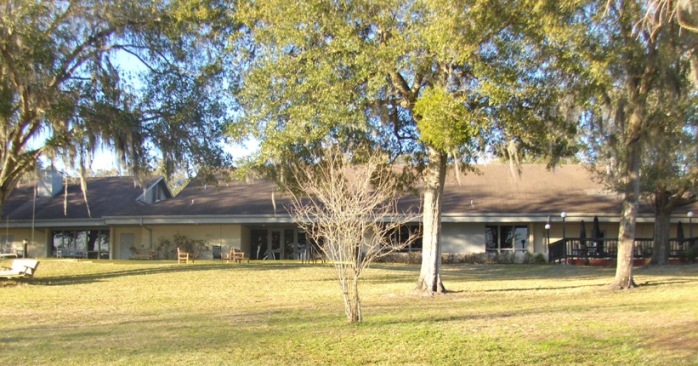 The earliest settlers brought the Anglican traditions to the American colonies. It spread rapidly as the country expanded westward.

The Episcopal Church is one whose traditions include attitudes that are Protestant and Catholic, ancient and reformed, liberal and conservative. It is the church of the "via media" or the "middle way". It is renowned as a church with few "musts". It points out and does not dictate a person's response to God. 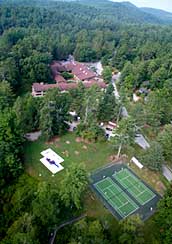 Episcopalians find the fullest expression of Christianity in the Bible, the ancient Creeds, the sacraments, and the ministry. "Scripture, tradition, and reason" is the Episcopal motto. This is best understood as the Bible, the Book of Common Prayer, and reasonableness! It is very common and expected that in any Episcopal Church you will find people of many different backgrounds, opinions, politics, and persuasions worshiping together in peace. That is because "respect" is such an important part of the Episcopal Church.

Interpretation of the Christian faith varies somewhat from parish to parish, but within the framework of understanding of the Holy Trinity, salvation, the church, and worship. For instance, the Episcopal Church is a liturgical church. It has formal rites for public worship. It uses three texts in worship — the Bible, the Book of Common Prayer, and the Hymnal. The texts will vary little from parish to parish, but the method of conducting services may vary greatly. This variance may be from very plain services to those with great ceremony. Every Episcopal parish is different. Most are "middle of the road". Others are very charismatic and pentecostal in nature. Still others are very "Roman Catholic" in nature. Others try very hard to be like English cathedrals. Still others vie to be "low church" while their neighbors are "high church".

When Episcopalians choose a church (where they have the choice), they are usually deciding on whether they want a small or large one, a plain one or an elaborate one, and a warm (friendly) or a cold (aloof) one. They are also like everyone else in picking a church home. They want to know if they like the clergy, especially his or her personality, preaching and teaching style.

Episcopalians are sacramental. They believe there are two main sacraments instituted and ordained by Jesus. They are the sacraments of Baptism and the Lord's Supper. Episcopalians call the Lord's Supper the Holy Eucharist. The word "Eucharist" means thanksgiving. The five other "minor" sacraments were neither directly commanded by Christ, nor are they applicable to everyone. They are Confession (now called Reconciliation of a Penitent), Confirmation, Holy Matrimony, Ordination, and Ministry of Healing (called Unction). 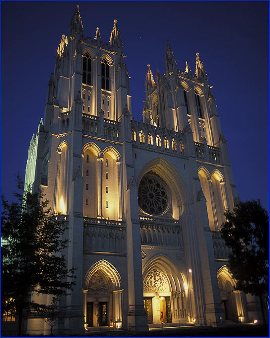 Clergy in the Episcopal Church are the bishops, priests, and deacons. Bishops are elected spiritual overseers of groups of parishes and missions, which includes their priests and deacons. Priests are parish and mission leaders. Deacons assist priests in parish duties. These are simple definitions of clergy duties. They all do much more. The Episcopal Church also has religious orders of monks and nuns.

So, being an Episcopalian means striving to fulfill Christ's mission of redemption. It means trying to follow God Commandments, raise children in Christ's' love, and being involved in building the Kingdom of God.

There is a lot to enjoy in the Episcopal Church, especially All Saints'. All Saints', Lakeland, Florida has been serving central Florida for 125 years! If you are looking for a vibrant church with a solid reputation and history, you will enjoy making this parish your home!